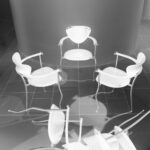 Internal conflicts within enterprises create billions of losses.
Within any company, no matter its size, conflicts of shorter or longer duration and intensity can arise. As long as the participants of these conflicts are able to solve them by their own effort, conflicts can represent a source of inspiration and a necessary cause for clarifications and improvements to the benefit of the company and all its members.
If a conflict remains unsolved for a longer period of time it will provoke a significant deterioration of the working climate and it will lead to destructive behaviours of some individuals which can become extremely harmful for other individuals as well as for the entire enterprise.
As a consequence hereof, working results lose quality.
Nowadays, working place conflicts represent a very important cost factor.
Employees who have a conflict between each other or who have a conflict with their superiors, as well as different members of the management who have unsolved conflicts between each other will not be able to work in an optimal and efficient way for your company.
They will dedicate a significant part of their time to their conflict and possibly to the unsuccessful attempt of solving it.
They may psychically suffer from the conflict or from the inefficient strategies through which their conflict partners try to solve the problem.
They may loose energy, they may even start to boycott their colleagues or superiors and they might create big damage to the enterprise. They may get sick and unable to go to work, they may leave the company, either because they had to be dismissed or out of their own decision.
All this creates immense financial and moral costs.
Mobbing is regarded as creating Billions of dollars of losses every year.
Our normal ways of handling a conflict can be helpful many times. We have the possibility of establishing a civilized discussion and with some good will we may come to an agreement. We have the possibility of getting a decision from a superior who decides in which way the conflict has to be ended.
Sometimes these possibilities to not lead to an efficient solution of the problem:
A highly professional approach becomes necessary in order to resolve a conflict efficiently, analyzing the deeper grounds of it and finding the necessary steps of clearing it once and for all.
A wisely designed conflict management system which is correctly applied can help you to avoid negative effects of unsolved conflicts. If a culture of mutual respect and recognition is built up, where any co-operator, no matter his function, is taken seriously as a human being with valuable ideas and respectable needs, if structures are given which are clear and understandable for anybody, if the working flow is organised in a way that guarantees that necessary and useful improvements are made in due time, if a system is implemented in your company where every employee knows how to behave in case of a conflict, you have very good chances that your co-operators will be satisfied with their work and that they will do their work in an optimal way to the benefit of the company and all its members.
Such a business culture can’t grow by itself. You have to work on it. Independently from daily decisions and pressuring practical questions that have to be answered without delay, the relationships between each other, the way we treat each other and the ensuing ways of solution finding within the enterprise have to be looked at. Even though there may still be people who consider such a deepened way of looking at psychological connections as superfluous an increasing amount of decision makers and institutions realize that an investment of time in the development of soft skills pays back a hundred times later on: satisfaction of co-operators increases, figures of fluctuation and absenteeism decrease considerably.
Once all relevant economical and psychological circumstances have been thoroughly analyzed we develop a made-to measure conflict management system for your company, which will fit perfectly with your individual needs along with our demand to deliver professional solutions on the basis of scientific knowledge.

We implement such systems in many languages, worldwide. We train your staff to apply these systems independently and likewise we give support to the extent that you can help yourself in practically any conflict situation. If necessary and required a further professional care can be offered.